Bringing Sampling Equipment — And Moral Support — to the Bahamas, After Dorian Their presence, by itself, was a comfort to Rashema Ingraham, executive director of Waterkeepers Bahamas and Bimini Coastal Waterkeeper. The official Bahamas death toll for the hurricane stands at 61 and is expected to rise. Rashema’s home was destroyed by Dorian, which hit the islands Sept. 1.

“People were literally picking through the destruction of their lives,” Christian said. “The timing of our work was perfect in their healing.”

Rashema said, “Having Pete and Christian here made me feel less alone.”

Christian and Pete also came with supplies — lots of them.

That included about $10,000 worth of water monitoring supplies, including a high-quality, durable water-testing meter and six months’ worth of calibration solution for the meter. Christian also brought enough bottles so that Waterkeepers Bahamas can now conduct six months’ of harmful-bacteria-indicator monitoring. 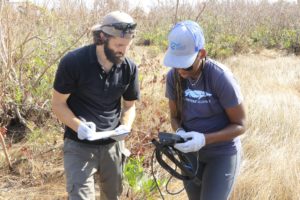 Working with Rashema and her staff, Christian and Pete assisted with documenting the oil spill at a storage site for oil company Equinor, whose Bahamas operations were formerly known as STATOIL. Dorian’s 185 mile-per-hour winds blew the roofs off five oil storage tanks at the Equinor/STATOIL site, which held 70 million gallons of oil. The company says it has so far recovered nearly 1.5 million gallons of oil at the storage site. 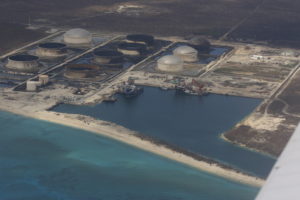 Roofs blown off five oil storage tanks on STATOIL/Equinor storage site on Grand Bahama. (One of the tanks was without a roof before Dorian.)

“Freshwater is a scarcity in the Bahamas,” Rashema says. “The islands in the north are covered in pine forests, which capture rainwater in underground lenses. The pine forest near the site was completely affected by this spill. My short-term concern is about the wildlife in the area, including migratory birds, such as the West Indian woodpecker and red-legged thrush. My long-term concern is about the safety of that freshwater supply.”

Based on visits and drone surveys of the land around the oil storage site, Waterkeeper and Save the Bays say the spill polluted about four square miles of pine forests and wetlands. 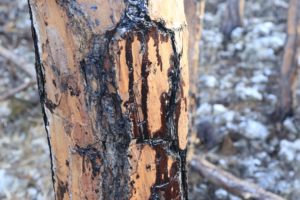 Oil on trees one mile from Equinor/STATOIL spill on Grand Bahama.

“The haphazard and superficial cleanup we witnessed at the site will not be adequate to protect the sensitive pine forests, mangroves, and reefs threatened by this spill,” said Joseph Darville, Grand Bahama Coastal Waterkeeper and Chairman of Save The Bays. “We witnessed workers knee-deep in oil. For their safety and the safety of this important ecosystem, the clean-up must be handled better.”

The first water sampling results completed after Pete and Christian’s visit show that the oil spill contaminated water in critical wetland habitat, some more than one mile away from the site of the spill.

Pete and Rashema met with Lars Myhre, Equinor’s environmental manager, on Sept. 24 to request that Waterkeepers Bahamas be granted observer status on the cleanup. Equinor agreed on Tuesday to planned monthly visits from Save the Bays. The company also gave Save The Bays and Waterkeepers Bahamas a tour of the facility and impacted area earlier this month.

Christian and Pete also assisted with water-quality testing at the site of the spill. In advance of the trip, Christian spent hours on the phone determining the correct paperwork he’d need to prepare in order to bring the samples back to the U.S.

Christian and Pete returned from the trip struck by how extensive the devastation was.

“On some areas of the island, the waves from the storm came eight miles inland, killing forests and mangroves with saltwater overnight,” Christian said. “Weeks later, those brown dead trees stood as a memorial to the birds and animals that once called them home.”

Based on the water sampling results, Waterkeepers Bahamas and Waterkeeper Alliance are working with government agencies and Equinor on further analysis to characterize the true impact to this critical wetland habitat. A comprehensive impact study must be completed to properly identify all impacted areas, to undertake the required remediation efforts, and to ensure nothing like this happens again in the Bahamas.