North Carolina is in a statewide crisis of industrial animal waste mismanagement.

Waterkeeper Alliance mobilizes a network of advocates stretching from the mountains to the coast in North Carolina to address the environmental and public health impacts of industrial animal agriculture. The integration of watershed-specific strategies, informed by local expertise and designed around shared aims, is the key to our success.

In North Carolina, Waterkeeper Organizations and Affiliates work to stop pollution caused by the concentration, lax regulation, and destructive waste disposal practices of industrialized livestock operations. They collaborate to:

The Transformation of Animal Agriculture in North Carolina

Industrialization and concentration has changed the face of animal agriculture in North Carolina. Consistent with the national trend, the amount of production has increased while the number of farms has decreased. For example, in the mid-1980s there were approximately 2.6 million hogs housed in 15,000 hog farms in North Carolina; by 1997, the hog population had ballooned to 8 million and those animals were housed in fewer than 2,400 farms.

Industrial hog, poultry, and cattle facilities, primarily operated by contract growers beholden to corporate integrators, have largely replaced the traditional family farm in the state. But those corporate integrators ignore their role in concentrating high volumes of waste in parts of the State. Instead, they push the responsibility for waste management on to contract growers, many of whom are financially incapable of installing appropriate waste treatment technology. The result is a statewide crisis of waste mismanagement.

Today, the meat production industry is spread throughout North Carolina. Waterkeeper Alliance and Environmental Working Group (EWG) released a first-of-its-kind interactive map revealing the locations of more than 6,500 CAFOs across the state of North Carolina. The mapping project identifies the size and approximate location of all swine, poultry and cattle CAFO operations in the state. Southeastern North Carolina is home to the heaviest concentration of swine in the nation, while poultry operations are widespread and expanding statewide and dairy facilities are primarily located in the western part of the state.  The interactive maps also allow users to view total estimated waste outputs on a facility, watershed, county, or statewide scale. An estimated 10 billion pounds of wet animal waste and 2 million tons of dry animal waste is generated annually in North Carolina from CAFOs, leaving tens of thousands of rural residents susceptible to air and water quality contamination.

Explore the maps below: 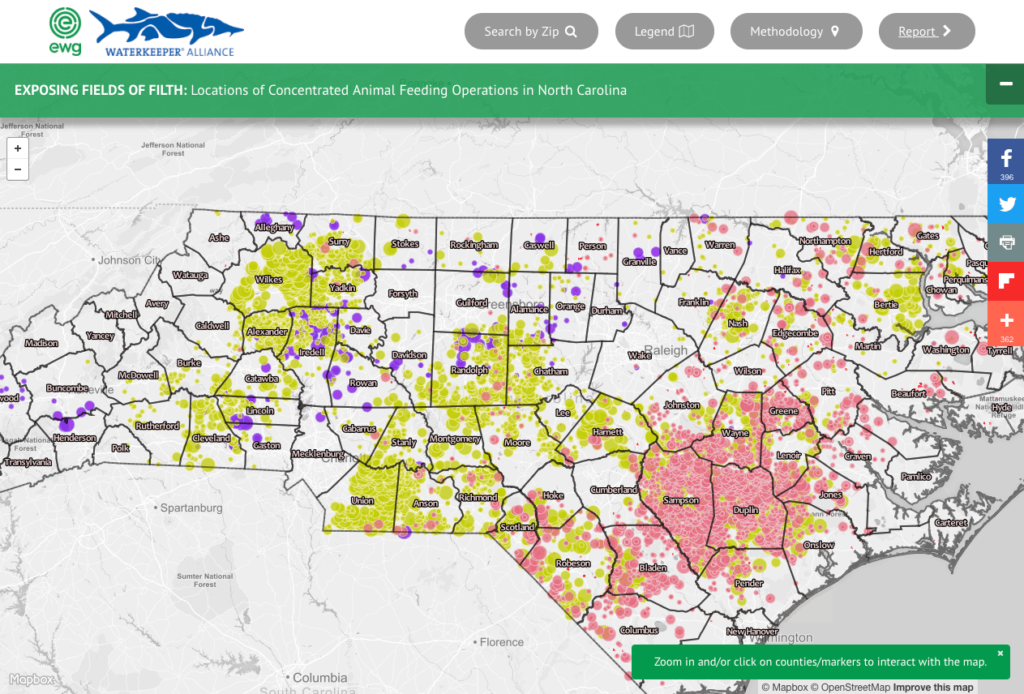 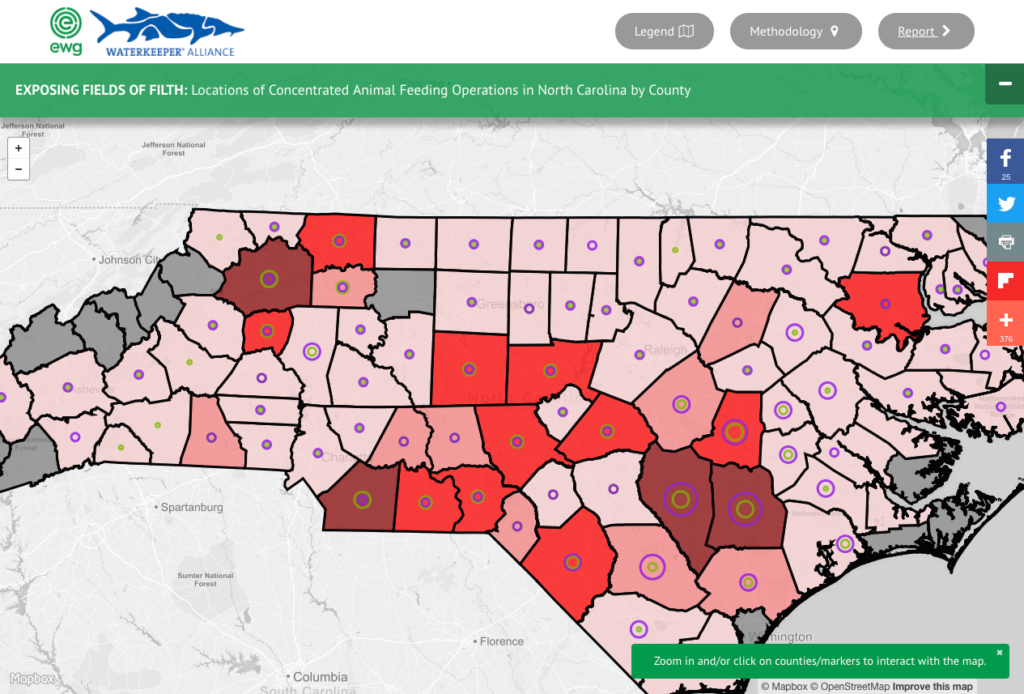 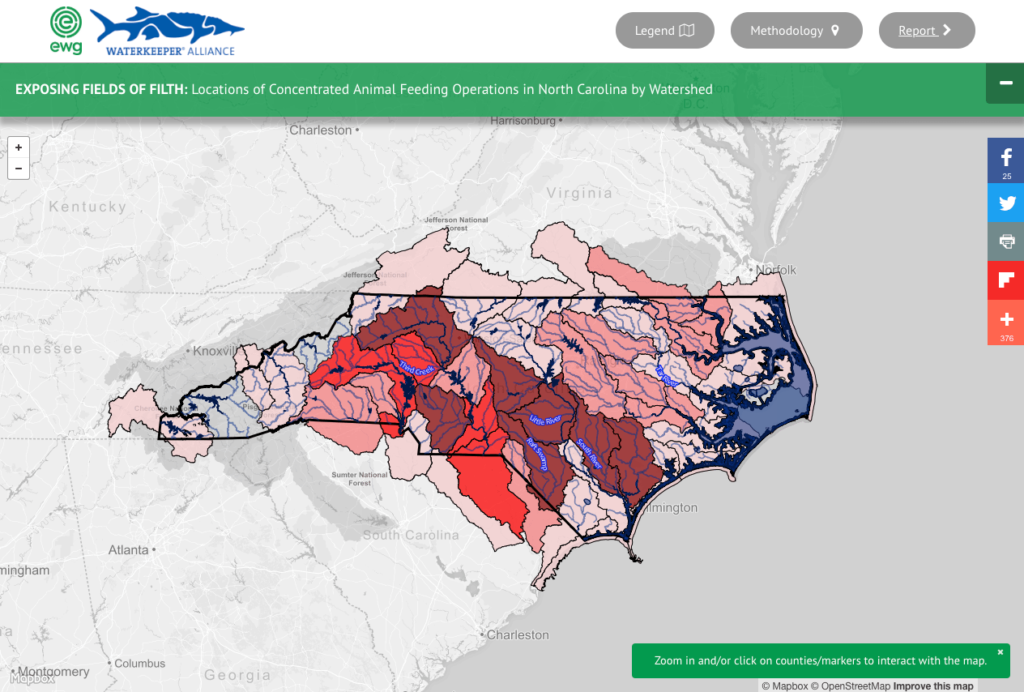 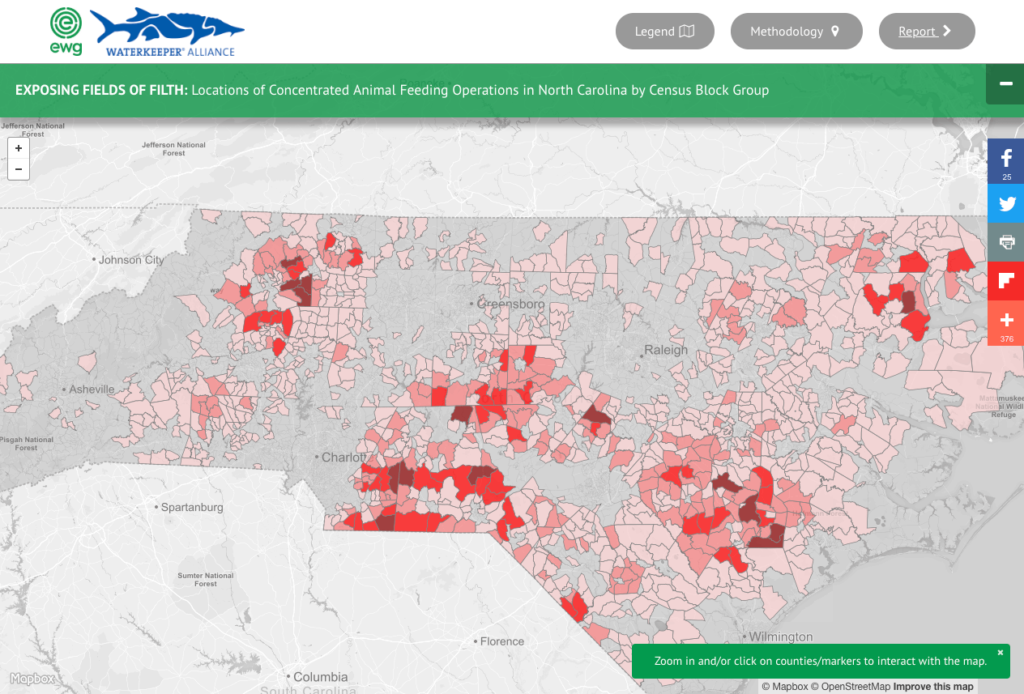 In areas with the highest concentration of CAFOs, different types of facilities are often commingled, amplifying the negative impacts to waterways and communities from the improper management of excessive amounts of waste. Still, it is important to recognize the distinctions between the hog, poultry, and dairy industries in the state.

North Carolina has more than 2,200 industrial hog operations. They confine an estimated 10 million hogs. The state is also home to the largest hog slaughterhouse in the world, which is operated by the largest pork producer in the world.  North Carolina produces the second most hogs of any state, but has the highest density of hog operations in the world. Only 12 hog facilities, or less than 1%, have been required to obtain a Clean Water Act permit. The vast majority of these facilities operate under a State General Permit that inexplicably assumes that all pollution is contained on-site, despite ample evidence to the contrary. Waste from North Carolina hog facilities is collected in large unlined pits where it is held until the being sprayed onto adjacent fields, often in quantities far greater than can be absorbed by crops.  Most of these land application fields are in the fragile, low-lying coastal plain, where they have been heavily ditched, in light of the high groundwater table, to facilitate crop production. These same ditches convey pollutants, such as nutrients and fecal bacteria, off-site and into public waters. Pollution also seeps into groundwater from the holding pits and spray fields. In addition to water pollution, ammonia, hydrogen-sulfide, and greenhouse gases like methane, along with foul odors, threaten air quality.

North Carolina produces approximately 822.7 million broiler chickens per year, the fourth most of any state, and approximately 31 million turkeys, the second most of any state.  Poultry waste is the largest and fastest growing source of nutrients from animal agriculture in North Carolina. The vast majority of poultry operations in the state operate without a permit.  Poultry waste, mixed with feathers and bedding to form “dry litter,” is spread on fields where it can be carried by wind and rain into nearby waters and communities. Before land application, the dry litter is typically stored in large piles exposed to the elements and subject to being blown away by the wind or washed into waterways by rain.

There are approximately 300 dairy CAFOs operating in North Carolina. These facilities generate thousands of gallons of liquefied waste each day, which is spread onto open fields resulting in many of the same water quality issues posed by hog farms using similar waste management methods.

There are more tons of manure generated per farmland acre in North Carolina than in any other state.  Extensive evidence demonstrates the significant impacts of CAFO waste mismanagement on North Carolina’s air, water, and communities.  Some of it is groundbreaking: for instance, a January 2015 study conducted by researchers at UNC-Chapel Hill and Johns Hopkins University used DNA markers to connect bacteria in waterways to hog operations, concluding that swine CAFOs in eastern NC are releasing high levels of fecal bacteria into public waters. In a joint study conducted by the NC Department of Environmental Quality (NCDEQ) and the US Geological Survey released in the summer of 2015, nutrient levels were compared between 54 sub-watersheds, some containing CAFOs and some not. The study found significant water quality impacts in watersheds containing CAFOs when compared with those that contained no CAFOs.

Scientific studies have documented numerous health impacts from living near CAFOs in North Carolina, such as asthma and other respiratory disorders, exposure to antibiotic-resistant bacteria such as methicillin-resistant staphylococcus aureus (MRSA), drinking water contaminated with nitrates, and emissions of hazardous gasses causing coughing, nausea, headaches, burning eyes and psychological effects.

Making matters worse, CAFOs in North Carolina are disproportionately located in low-income communities and communities of color. Waterkeeper Alliance is working with our partners to combat these disparate impacts.  We lodged an administrative complaint in 2014 with the US EPA’s Office of Civil Rights, which led to an extensive investigation culminating in the issuance of a Letter of Concern from the federal agency to NCDEQ expressing “deep concern” that the State’s failure to adequately regulate more than 2,200 industrial hog operations has a disparate, discriminatory impact on African American, Latino, and Native American communities in eastern North Carolina.

The North Carolina CAFO Campaign employs a strategic blend of public outreach and education, community support, partnership building, regulatory reform, litigation, and field investigation designed to expose and reform industry practices, cleanup North Carolina’s waterways and force the state and federal governments to enforce the requirements of the Clean Water Act.  CAFOs pose a threat to communities across North Carolina.  To learn more about these issues in your watershed, contact Waterkeeper Alliance directly or the local Waterkeeper Organization in your area: