North Carolina’s Farm Bureau recently led tours of factory swine operations for both lawmakers and bloggers, which was ironic, given how hard the Farm Bureau fought against transparency requirements for those operations.

While the Farm Bureau appears eager to present a sterilized version of these operations to a select few, it fought all attempts at greater public transparency during the recent renewal of the permit governing animal waste management at these operations.

This is not new.

Indeed, when neighbors sued $15 billion Smithfield Foods for unhealthy and unsafe conditions caused by its operations, the corporation demanded that the jury tour facilities. The trial judge, observing that the neighbors were complaining about conditions that were harmful, but intermittent, wisely rejected the request. He reasoned that a visit could mislead the jury about the reality of living next to an industrial hog producer.

Indeed, just days after the Farm Bureau tour, its friendly representatives in the legislature slid new amendments into the North Carolina Farm Bill that would reduce transparency around industrial pork production. One amendment would prevent access to state records related to the operations. A separate amendment would thwart efforts by the state Department of Environmental Quality to gather and make public annual reports about industry operations. 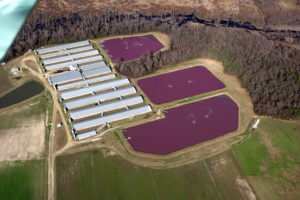 A typical factory swine operation, with cesspools of hog waste next to the facilities.

While the legislature aims to shield the industry from scrutiny, and the industry attempts to present an alternate reality, the facts continue to show that neighbors of industrial swine operations suffer.

I wonder if the Farm Bureau mentioned this on their guided tour.