Following the release of the 2019 Insurance, Coal, and Climate Change Scorecard, demonstrators visit Liberty Mutual offices in Boston and Seattle

Today, the Insure Our Future campaign is paying a visit to Liberty Mutual offices in Boston and Seattle, demanding that the top fossil fuel insurer take responsibility for its role driving the climate crisis. The actions follow the launch of a new report scoring major global insurance companies on their climate policies, in which Liberty Mutual ranked at the very bottom. Demonstrators talked with Liberty Mutual employees walking into their offices to let them know that their company is among the worst insurers on climate change.

“We are here today because Liberty Mutual refuses to even acknowledge its major role in fueling the climate crisis. The insurance giant has not responded to more than sixteen requests since July 2018 to discuss its support for the fossil fuel industry,” said Elana Sulakshana, Energy Finance Campaigner at Rainforest Action Network. “Without insurance coverage, new fossil fuel projects cannot be built and existing ones must be phased out, which is the pathway we urgently need to be to stabilize the climate.”

Liberty Mutual is a top global insurer of coal, oil, and gas. It also invests more than $8.9 billion in fossil fuel companies and utilities, including $1.5 billion in thermal coal. Yet, while fueling the climate crisis, Liberty Mutual is withdrawing coverage from and jacking up the costs of insurance for longtime customers in areas at risk of climate change impacts, like wildfire-affected counties in California.

“Liberty Mutual knows that climate change is a major cause of ever-worsening wildfires, floods and storms, but the company continues to prop up fossil fuel projects,” said Randi Mail, Political Director with MassDivest, a statewide coalition in Massachusetts that is advocating for divestment from the fossil fuel industry. “Europe’s biggest insurers are responding to the climate crisis by rapidly phasing out their support of coal. Liberty Mutual must stop its willful ignorance of its role in the crisis and follow suit.”

The number of insurance companies withdrawing coverage for coal has more than doubled in 2019 as the industry’s retreat from the sector accelerates and spreads beyond Europe, the Unfriend Coal campaign revealed earlier this week in Insuring Coal No More, its third annual scorecard on insurance and climate change. Despite the first fossil fuel policies from U.S. companies Chubb and AXIS Capital, the U.S. industry is still far behind its European counterparts. Liberty Mutual is a clear laggard, ranking at the bottom of the 30 companies assessed, with scores of zero across the board on insurance, divestment, and other climate leadership.

“Scientists agree we are nearing a tipping point on climate, and bold action in the next 10 years will be critical to avoid the most catastrophic consequences. Unfortunately Liberty Mutual is completely asleep at the wheel when it comes to tackling the drivers of climate change,” said Chris Wilke, the Seattle-based Global Advocacy Manager with Waterkeeper Alliance, which seeks to preserve and protect waterways across the planet. “Liberty Mutual is backing destructive projects like the Trans Mountain tar sands pipeline, which poses grave threats to waterways, Indigenous rights, and the climate.” 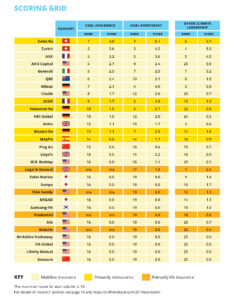 Insure Our Future, made up of leading environmental and consumer rights organizations, pressures the insurance industry to accelerate the transition to a low-carbon future. It is supported by 350.org, Indigenous Environmental Network, Greenpeace, Rainforest Action Network, Public Citizen, Sierra Club, and Waterkeeper Alliance, among others. No More Coal Ash Toxics in Our Waters!