Yes, States CAN Protect Their Waterways From Pipelines

The number of pipeline projects across the United States has skyrocketed over the past ten years, as hydraulic fracturing with horizontal drilling, the process known as fracking, has become a prevalent means of oil and gas extraction. As our many Waterkeepers who have opposed these projects can testify, pipeline construction can have enormous adverse impacts on water and air, and on fish-and-wildlife habitats, including those of endangered species. And these impacts don’t end once construction is complete. Erosion, sedimentation, turbidity and temperature changes in waterways can persist for years after construction is complete. Further, once a pipeline is in service, there are the very real threats of leaks, spills and explosions, and of significant impacts, especially to air quality, caused by the noisy, obnoxious compressor stations that keep fuels flowing through pipelines. Meanwhile there’s always the “elephant in the room” – global climate change. The more we continue to build a vast network of fossil-fuel pipelines, committing to extract and burn remaining reserves of oil and gas, the greater we endanger ecosystems around the world and the health and well-being of billions of people.

In 2012, when I was managing the environmental litigation clinic at Pace Law School outside New York City, a student suggested that we represent a group of citizens she had helped form to oppose the proposed Constitution Pipeline, a 121-mile interstate gas-pipeline project that would cut through approximately 99 miles of forest  and agricultural areas and approximately 250 waterways in central New York State. The pipeline would transport fracked gas from shale formations in Pennsylvania to Wright, New York, where it would connect with other pipelines, likely to be exported as liquefied natural gas.

I had never been involved in opposing an interstate pipeline project, so I began researching what opposing this project might entail. The news was not good. I learned that the agency responsible for licensing and regulating interstate natural gas pipelines, the Federal Energy Regulatory Commission (FERC), had been, in effect, “captured” by the gas industry it is supposed to regulate, and was in large measure failing to protect communities from the adverse environmental impacts of pipeline projects. Under the National Environmental Policy Act (NEPA), FERC is required to assess each application on its own merits, and determine, after considering environmental impacts, whether a proposed gas pipeline would meet the federal Natural Gas Act’s (NGA) standard of “public convenience and necessity.” But the agency consistently downplayed these impacts and assumed that construction and operation would serve the public interest. In virtually every case, FERC put the interests of gas drillers and pipeline companies ahead of those of private property owners, almost never including in its public-convenience-and-necessity calculus any earnest consideration of the interests of those who may oppose pipelines for valid reasons, including threats to their environment, safety and property values. What I learned was that once a certificate of convenience and necessity is granted, the NGA gives the recipient company the power of eminent domain to condemn private property, regardless of landowners’ objections, and often with minimal compensation. 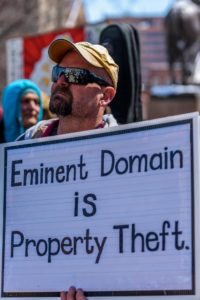 Our law clinic ultimately took on representation of “Stop the Pipeline,” a group of concerned citizens and property-owners along or near the proposed pipeline route. The student who had motivated us, Anne Marie Garti, who later graduated from Pace Law School and passed the New York bar, joined our representation as a volunteer attorney. Already a seasoned activist, she proved to be a skilled grassroots organizer and legal strategist, and played a key role in organizing opposition in the affected communities. She quickly mastered the FERC process, and helped formulate our plan to fight it. 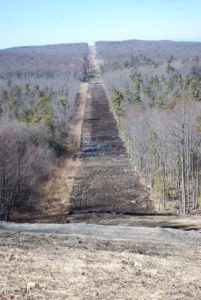 The process of building pipelines can be devastating to forest lands, as in the photo above. Photo by North Jersey Pipeline Walkers.

We recognized early on that citing NEPA violations to kill this dangerous, misguided project would be a long shot, for such violations by federal agencies can sometimes delay, but rarely kill, a project, so we would need to successfully implement other strategies. One of these would be to urge New York State to assert its authority under the federal Clean Water Act’s section 401. While under the NGA, most state environmental laws and regulations are preempted by FERC’s virtually exclusive authority, section 401 expressly reserves water quality certification (WQC) to the states. Several waterways the pipeline would cross are cold-water streams designated as supportive of wild trout spawning, and New York historically has protected these fisheries. In fact, the state had not been shy in flexing its regulatory muscles in regard to a number of cases involving water quality certification. For example, in another recent clinic case involving Nuclear Regulatory Commission relicensing at the Indian Point nuclear power station, the New York State Department of Environmental Conservation (DEC) had denied a WQC. We determined that a careful review of water quality impacts and engagement with state regulators through the administrative process might provide one opportunity to stop the Constitution Pipeline project.

Our technical review of the proposed route and construction details, aided by academic experts in water quality and ecology, revealed that this project would, in fact, cause long-lasting impairments to water quality and violate state standards. We included those experts’ reports in two sets of technical comments submitted to the DEC that demonstrated how those waters would be impaired and sensitive habitats destroyed.

While the WQC application was pending, DEC made repeated requests to the pipeline company to provide technical information regarding the hundreds of stream-crossings it had proposed. DEC advised the company that it requires most stream-crossings to be made using trenchless techniques, such as horizontal directional drilling under streambeds rather than damming and ditching through streams. The pipeline company arrogantly argued that it was not feasible to use those techniques for the vast majority of stream-crossings, and that only FERC could determine what construction techniques were required. DEC responded that the company must provide technical feasibility reports for crossings it believed could not be made using trenchless techniques. But the company effectively blew off DEC, providing reports for only a small percentage of the requested crossings. Moreover, the company rejected DEC’s advice to minimize impacts by constructing much of the pipeline on an existing right-of-way, the I-88 highway corridor, and had convinced FERC to authorize a less costly pipeline route through farmland and greenfield areas with steep slopes, which would cause significant degradation of water quality. 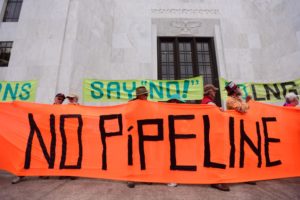 Citizens from coast to coast are taking to the streets to fight pipelines that will hurt their communities. Here, locals rally against an LNG pipeline at the Oregon State Capitol. Photo by Alex Milan Tracy.

On Earth Day 2016, as the one-year period allowed by the Clean Water Act for a state’s consideration of a WQC application was about to end, DEC issued a Notice of Denial, which explained that the company had rejected DEC’s advice and had failed to provide most of the technical information the state had requested, and had thus failed to demonstrate that the project would not cause or contribute to violations of state water quality standards.

The company appealed this notice directly to the U.S. Court of Appeals for the Second Circuit, which, under the Natural Gas Act, had jurisdiction over the challenge. The Pace clinic intervened in this appeal on behalf of Stop the Pipeline. The pipeline company argued, among other things, that a state’s jurisdiction to review, and “in effect, veto,” FERC’s findings made during the NEPA process is pre-empted under the NGA. On August 18, 2017, the Second Circuit denied Constitution’s petition, expressly rejecting the company’s pre-emption argument. The court noted that, while the NGA generally pre-empts state laws, it states that nothing in the statute affects the rights of states under the Clean Water Act. The court then pointed to section 401, which expressly states that “[n]o license or permit shall be granted if [a WQC] has been denied by the State.” Thus, the court noted, section 401 can indeed fairly be described as “a statutory scheme whereby a single state agency effectively vetoes an energy pipeline that has secured approval from a host of other federal and state agencies.”

What lessons can we take from the Constitution Pipeline experience for future engagements in the FERC pipeline-approval process?

First, be creative and think beyond the National Environmental Policy Act. Second, help state regulators understand through the administrative process that the Natural Gas Act expressly preserves their authority to protect state waterways. Third, provide those regulators with ammunition in the form of water quality data and expert reports, which they can rely upon should they wish to call “foul” on a proposed pipeline project. Fourth, recognize the value of submitting such data and reports during a WQC comment period, even if it seems likely that a state would not assert its WQC authority, as an arbitrary and capricious grant of a WQC by a state could be the subject of a judicial challenge.

Finally, it is important to be aware that FERC is now pushing back against state WQC authority. The commission recently took the position regarding another New York pipeline project that a denial of a WQC by DEC was ineffective because it had waived its authority by not making a decision within one year of filing of the WQC application. DEC had taken the position that the one-year clock started to run as of the date that it deemed the WQC application “complete,” but FERC ruled that the clock starts on the filing date of the application even if it is incomplete. Seeing an opening to potentially revive its moribund pipeline project, Constitution Pipeline Company recently filed a petition for a declaratory order with FERC seeking a ruling that New York also waived its WQC authority on that project. Waterkeeper Alliance has intervened in this FERC proceeding to fight any effort to chisel away at state 401 WQC authority.

It remains to be seen where courts will land on these issues, but states that wish to preserve their authority to deny or condition WQCs pertaining to FERC projects should assume that the clock on their one-year period in which to do so begins to tick on the original filing date of a WQC application by a pipeline company.