A Global Look at How Dams are Destroying our Waterways 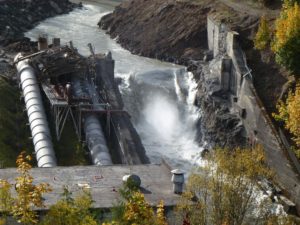 After the removal of the Elwha Dam in Washington state — the largest dam removal in U.S. history — the Elwha River is thriving. Photo by Kate Benkert (USFWS).

A global look at how dams are destroying our waterways

There are many issues affecting the waterways that more than 340 Waterkeeper Organizations patrol and protect in 44 countries. But one issue is so pervasive that it affects rivers and their fisheries in nearly every corner of the world: hydropower dams. These dams are sometimes touted as “clean energy,” but it is abundantly clear that they are not. Along with diversions and reservoirs around the world, dams cause immense harm to waterways, wildlife, economies, and communities. This letter offers a global perspective on the damages they cause, but also presents a case for hope.

Dams have long flooded people out of their homes. Studies estimate that nearly 80 million people have been displaced by dams globally. It is rare to find a case study that shows a displaced community reaping all the benefits promised to them; in reality, they are more likely to face a long trail of broken promises. For example, according to the Geneva-based Internal Displacement Monitoring Centre, the Manwan Dam built by China on the Mekong River displaced more than 7,000 people, who never received enough compensation to build adequate replacement housing, while they suffered from landslides and water shortages.

Dams often cause damage to critical river habitat and destroy fisheries around the world, impacting the temperature, quality, quantity, and frequency of instream flows, as well as degrading or destroying adjacent floodplains and wetlands, which are crucial for healthy ecosystems. Further, these impacts increase risks to already threatened and endangered aquatic species.

And many dam and diversion projects involve repair, replacement or relocation of infrastructure, much of which may be a half-century old, if not older, at a cost of two-to-five times greater than that of original construction. This expense of updating aging dams often exceeds the profit from the electricity they generate.

These worldwide negative impacts on waterways and communities spurred Waterkeeper Alliance to adopt a “Free Flowing Rivers Initiative,” which opposes construction of new dams and diversions or supports mitigation of their impacts where there is no other option, and advocates for removal of dams wherever possible. The initiative is designed to connect and support battles against dams wherever they are engaged. Below are a few of the most urgent examples:

In Southeast Asia, the Mekong River basin is being threatened by a spate of proposed mega-hydropower dams, including eight in China, nine in Laos and two in Cambodia, where Tonle Sap Lake Waterkeeper Senglong Youk is leading efforts to oppose them. These new dams would threaten the largest inland freshwater fishery in the world, which provides food and economic security to 60 million residents of those countries, as well as Burma and Vietnam.

In the Middle East, Waterkeepers Iraq has joined a coalition of Iraqi and international groups in the “Save the Tigris” Campaign, which promotes the restoration of the Mesopotamian Marshlands of southern Iraq and opposes destructive projects such as the Ilisu Dam on the Tigris in Turkey and the Daryan Dam on the Sirwan River, an upper Tigris tributary, in Iran.

In Canada, Grand Riverkeeper Labrador’s Roberta Frampton- Benefiel is one of the grassroots leaders in voicing concerns about Nalcor Energy’s $12-billion Muskrat Falls dam because of its production of methylmercury, a neurotoxin linked to heart problems, neurological damage to children, and also makes fish consumption dangerous and threatens traditional foods for First Nations’ communities.

In Peru, Marañón River Waterkeeper Bruno Monteferri, an environmental lawyer and activist, has been on the front lines of the resistance against a proposal to build 20 dams on the Marañón River, the hydrological source of the Amazon. To date none of these large dams has been constructed, and local opposition, in the face of corporate corruption and political lobbying, has led to a moratorium on all dams until 2021.

But make no mistake, engaging in advocacy against dams is dangerous business. This was tragically proven in 2016, when Goldman-Prize-winning Honduran environmental activist Berta Cáceres, who championed efforts to protect the Gualcarque River from large-scale development projects such as the proposed Agua Zarca hydroelectric dam, was murdered while participating in a peaceful protest. In March 2018, the president of the company planning the Agua Zarca dam – a former Honduran military intelligence officer – was arrested for her murder.

Globally, according to The Guardian and Global Witness, approximately 200 environmental advocates were killed in both 2016 and 2017. It has been reported that most of these advocates died while opposing mining, dams, logging, and the activities of agricultural interests. While many of the killers were never brought to justice, reliable sources report that most of them were hired by governments or corporations.

Hope for the future

Still, a number of factors help point to a better future. “Climate-friendly” energy sources are becoming more abundant and cheaper than traditional ones. New technologies and management practices are dramatically increasing water conservation and mitigating mismanagement and waste. Governments are responding to citizen demands by shelving dam projects. As noted above, citizen resistance led Peru to enact a moratorium on dams. In 2016, after years of opposition from a network of communities and advocates, including Futaleufú Riverkeeper and Waterkeeper Alliance, the electric company Endesa relinquished its plans to dam the Futaleufú River in Patagonian Chile.

The most powerful and exciting factor pointing to hope for the future is that groups are organizing and working together to oppose new dams and diversions, fight for mitigation of dams’ impacts, and advocate for their removal. In Sweden, where virtually all power is now generated from fossil-fuel-free sources, Älvräddarnas Waterkeeper, Swedish Baltic Rivers Waterkeeper, and others keep fighting to eliminate dams, and last year, after seven years of protest, a county board announced that it would remove the ancient sawmill dam on the Emån, one of Sweden’s 16 Baltic salmon rivers, restoring approximately one-third of the river’s habitat.

These stories of citizens rising up to oppose dams or advocate for their removal will continue to develop as residents become increasingly aware of the truth about “clean” energy. And one day, our rivers will flow free again.